Herstmonceux is my 4mm OO gauge layout based on the never built Ouse Valley Railway set in the early 1950’s. 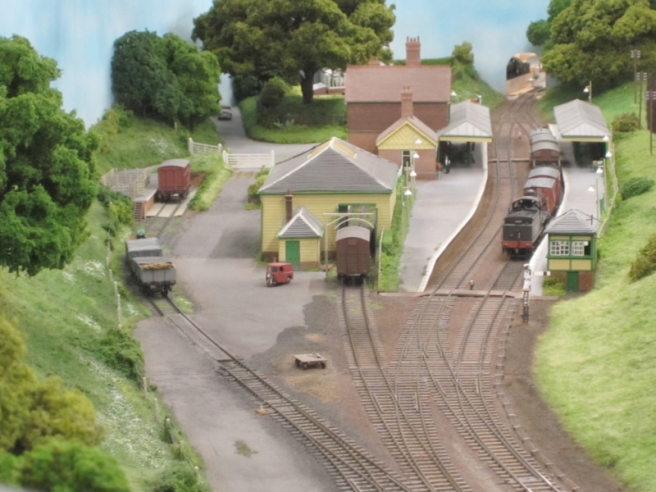 The London Brighton and South Coast Railway were going to build a line from just south of the Ouse valley viaduct on the London- Brighton line, over to Uckfield, crossing the Bluebell line at Sheffield Park on the way and on to just north of Hailsham on the Cuckoo line. Then join the also never built St Leonards railway. My idea was that the line was built and passed through Herstmonceux, Ninfield and then on across to St Leonards.

If you want to read more there is a great site showing the plans and the parts that were built here http://www.railwaytrains.co.uk/ouse2.html

The layout has a 14ft scenic section with 2x6ft fiddle yards on each end. Track is SMP flexi with points built using Templot plans and copper clad strip laid on cork sheet. Electrics are simple DC Cab control with wire in tube used on most the points. Signals all work including the ground/shunt signals. These are operated by servos through MERG servo4 control boards.
The station building is a modified Bachmann Sheffield Park building with scratch built canopy. All other buildings are scratch built. The signal box is based on Rotherfield and Mark Cross, the goods shed is based on Eridge and the canopy on platform 2 is based in Kingscote.

Stock is a mixture of kit built and modified RTR items. All the locos are based on ones that would of been seen in the area in the early 50’s. Coaches are formed in sets with “loose” coaches, vans and the odd horsebox added for variety.

There are the odd visitors from time to time which might not be so in keeping with the region or era but that’s all part of the fun.