A couple of new locos added the the fleet. First up another RT models sentinel. This is one of the pre-war 100hp locos. Like the first one I built this is a superb kit with everything you need and extra parts to make different versions. I may get round to doing the streamlined style next. Here it is at the front with my other two before it gets weathered.

Next up is a Judith Edge 14″ Hunslet. Again another great kit which I have fitted with Gibson wheels, High level gearbox and a cheap Chinese motor. Most of my industrial locos have been small 0-4-0s so it was nice to build something slightly bigger for Tarring Neville and I’m working on another bigger loco for the layout at the minute. As with the Sentinel, the Hunslet is waiting on some weathering.

Lastly something that wasn’t built for myself. Oly over at otcm.wordpress.com asked if I would build his Mercian models Hudswell Clarke 0-6-0DM for him. It’s not one of the most straight forward kits I have ever built. Building the frames was a bit of a nightmare as the holes didn’t line up and then the coupling rods didn’t match either. It took a bit of head scratching but I managed to get a nice smooth running chassis in the end. I had joked with Chris that the body surely couldn’t be as bad but that came back to bite me! Anyway after much cussing a rather nice if slightly ugly loco emerged. It’s now back with Oly and i’m looking forward to seeing it weathered.

It has been a stressful year and why I haven’t been updating the blog as much as I would of liked to. Hopefully that will change now and I’ll get back into posting regular updates.
This weekend I’m out with Tarring Neville at the Tolworth Showtrain. I have been working on a few new items of stock. A Hornby B2 Peckett has joined the fleet for the cement works. I removed the printed name plates, fitted dumb buffers, added tarps to the cab sides and weathered it. I have also finished a couple more of the RT Models wooden tipper wagons for internal use by the cement works.

Lastly one item that has been sat waiting for me to finish it is a Roxey Mouldings LBSCR Stroudley Brake 3rd finished as a engineers tool/mess van. The idea came after reading that there used to be a grounded body of a Stoudley coach used as a mess van at Newhaven shed for a while. I have numbered mine as one of the examples that is preserved at the Bluebell railway  and as part of my fictional history decided it ended up at Tarring Neville for use in the cement works as an internal user van after being used locally by the SR engineering department. I have removed a couple of compartment partitions as seemed to happen when being taken in to engineers use.

A reminder that Herstmonceux is at the Epsom & Ewell MRC show this weekend for what could be its last outing due to proposed station closures.

I started Herstmonceux back in 2012 wanting to recreate a sleepy Sussex station and two years later took it to Tonbridge show for its debut.. Since then it has done 10 shows and picked up a few awards but its outing to Epsom & Ewell MRC exhibition in April will be its last for the foreseeable future. I have been lucky to have a good team of friends to help me take it out on the road the last six years and we’ve had some great times at the shows we have done. It has also been good to meet readers of my blog that have followed its progress and make new friends along the way.

Well its been a while since I have done an update and thats mainly due to my Mum passing away at the begin of the year. As you can imagine life has been pretty hectic as a result. Unfortunately it also mean’t I had to pull out of the Alton show with Herstmonceux but I did take Tarring Neville along to the Canterbury show. It was a welcome distraction for me and was good to be around friends. We ended up in a small layouts/industrial corner with Oly’s Six Quarters, 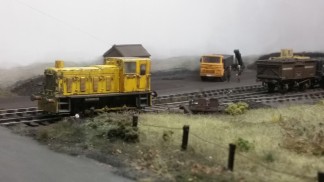 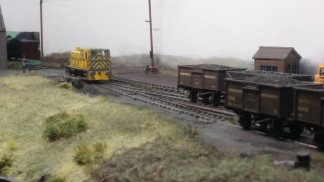 Kirkmellington which was great to finally see in the flesh, 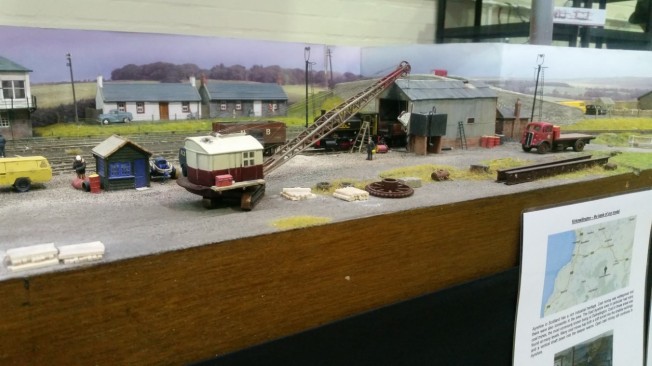 and Saint Amis Sure Mer from Belgium. This I was really looking forward to seeing as its design/presentation was similar to Tarring Neville’s. 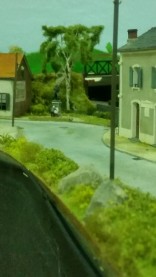 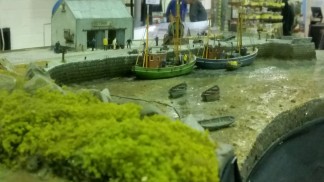 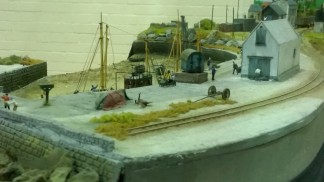 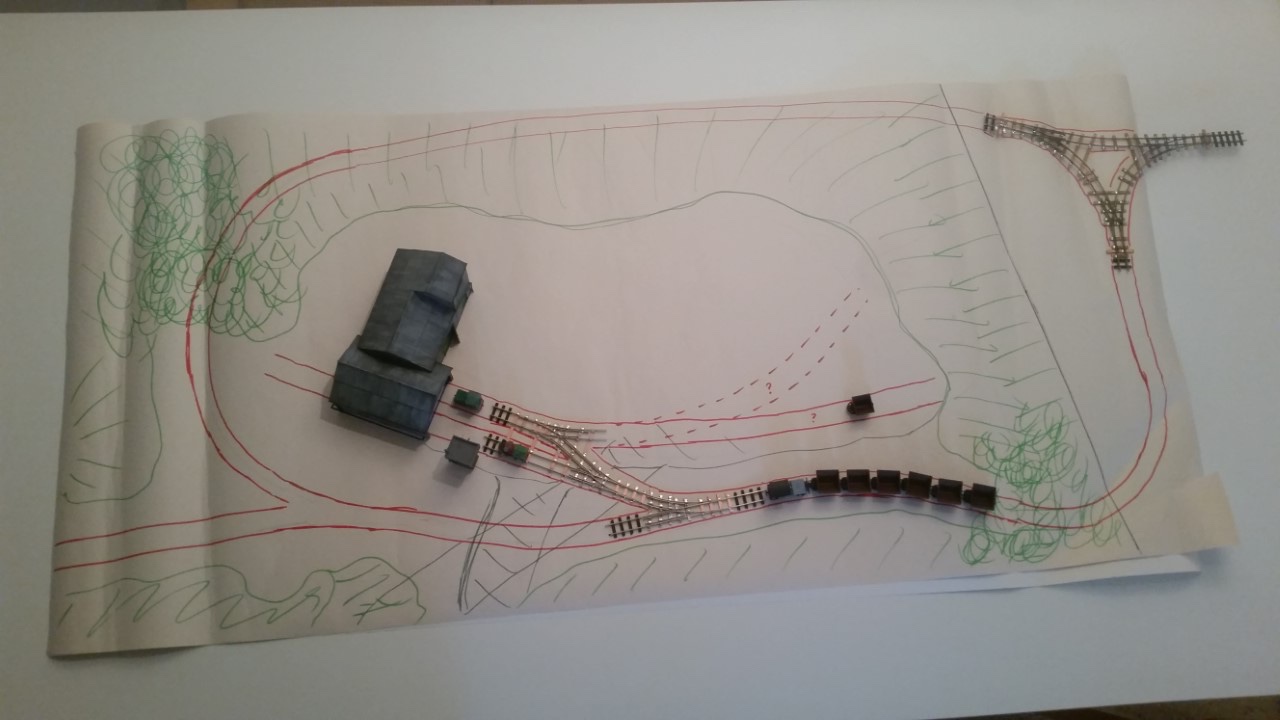 This is the plan for the Chalk pits feeder line so far. It’s roughly 5ft x 2ft and will be viewable on three sides like Tarring Neville and will also have a cantilever lighting rig. The right hand end is going to be a  fiddle yard and the spur off at the bottom left will be to South Heighton when they are joined together. The idea is that a loaded train will exit the fiddle yard and enter bottom right and either go to South Heighton or go round and back to the fiddle yard via the hidden loop. This will then return the opposite way as a empty train. The scene itself will be set in a older chalk pit with a works building/ loco shed. This was based loosely on a building that was a Rodmell cement works. 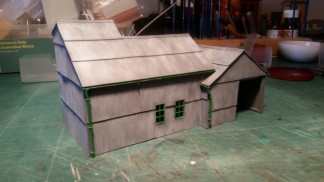 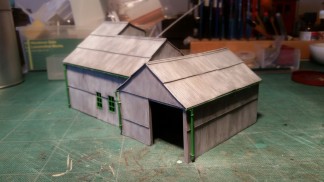 As can been seen in the plan, I have almost got all the point work made which will be operated by wire in tube. I have also made a start on a water tower/coal stage to go next to the shed so the next step will be to cut some wood and get the board made. The loco roster is now up to three with a Nigel Lawton O&K added to the Ruston and Kerr Stuart. The O&K was interesting to build and I modified the way the motor sits to hopefully make it perform better. I plan to add another couple of loco for variety plus need to build a load more skip wagons!

So before Manchester show a few weeks ago I wanted to get Tarring Neville’s sign finished. I was very lucky to have a good friend surprise me by making a sign for Herstmonceux and so it was decided that Tarring Neville would need one too.
The idea was to make something that looked like it had been mounted on a building but had been found years later looking a bit worse for wear. Fortunately we had just replaced the bargeboards on the house and I kept back a few bits of the old ones that had a lovely pre-weathered look. A rough size was worked out and I glued and pinned three bits together and added some edging. I then scored along the bottom edge and snapped it off to represent some damage.

The lettering was pencilled on but changed my mind after this picture was taken and put YARD OFFICE instead of just office. Once the sign was paint I started to distress it with some sand paper a hammer and a knife. The newly distressed areas were given a wash of dirty brown/black paint to make it look slightly rotten and aged. Some mounting holes were drilled in it with one being opened up a bit more to look like it had been ripped off the wall. 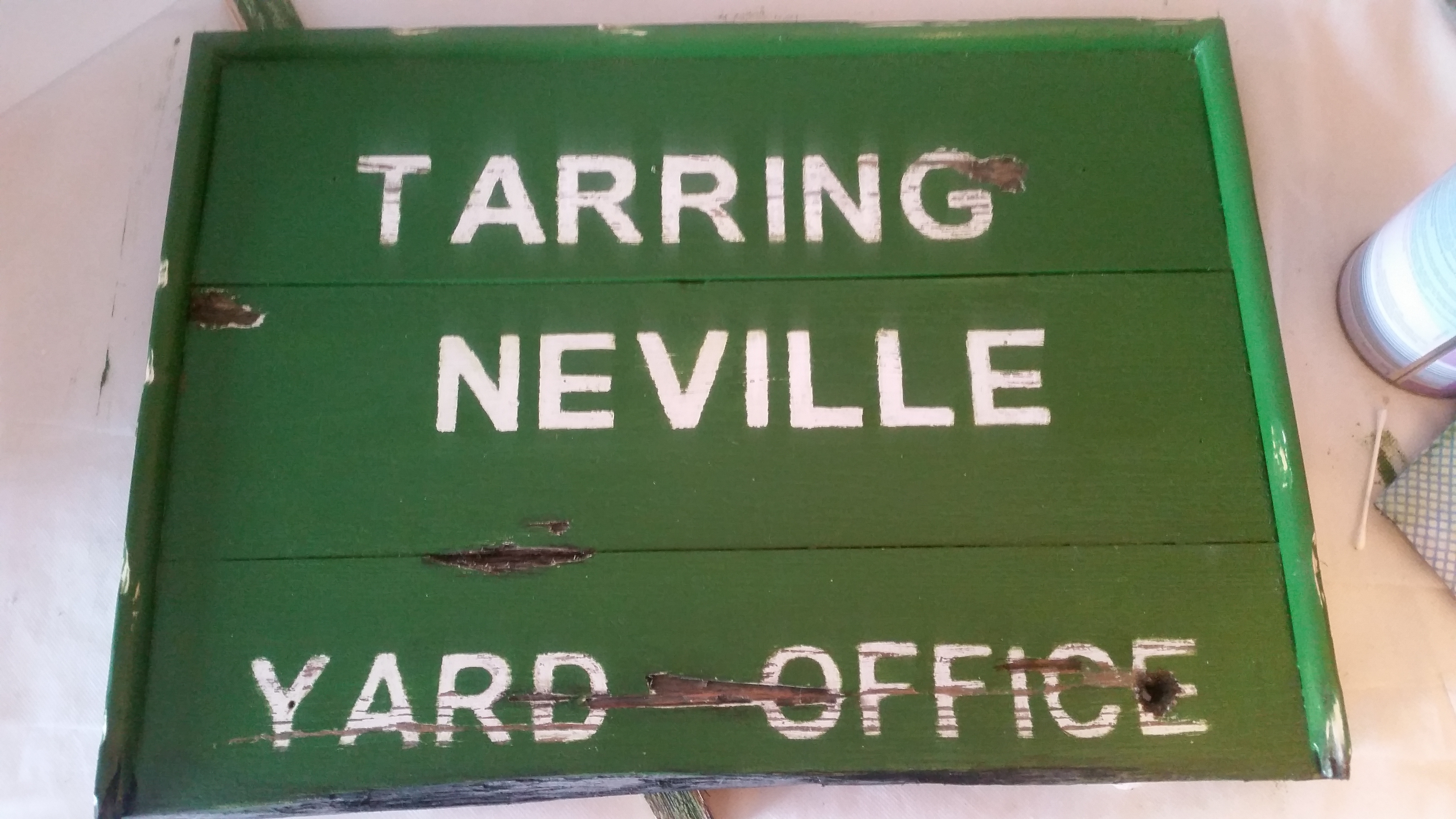 The last thing to be do was make a miniature one and mount it on a building on the layout.

Really enjoyed Manchester show again and was good to chat with so many people. Tarring Neville picked up an award for “Best scratch built model” for the partially demolished building by the loading dock. Was good to see Black Lion Crossing at last and had a good chat with Geoff Kent about his Conflat L’s which I’ve been looking to build a couple of. 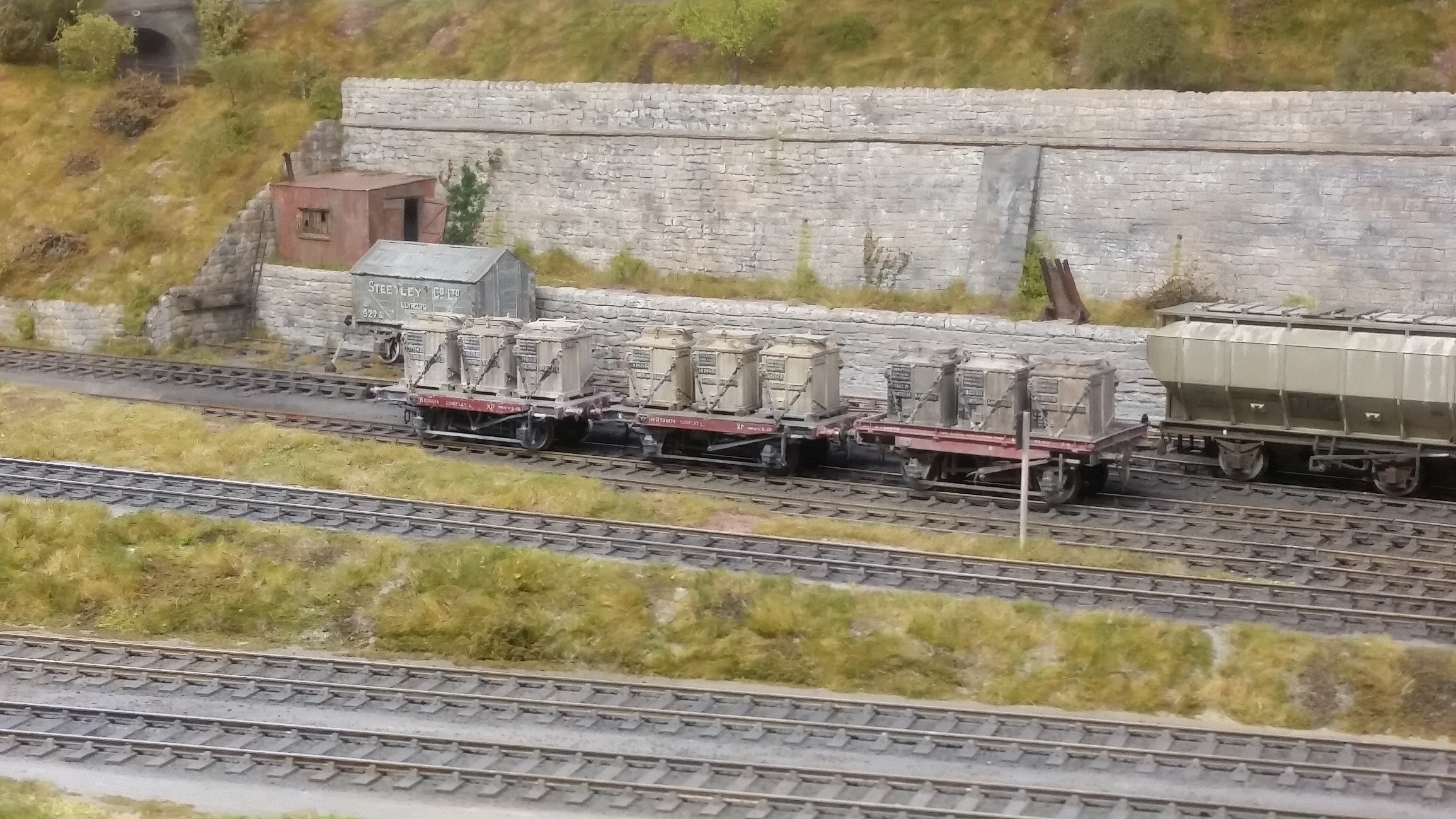 Merry Christmas to all the readers of the blog and best wishes for the New Year.

...far, far away in Leaky Villa with the kettle on, a tin of post-apocalyptic peaches & the Marmalade Lurcher

The thinking behind and construction of model railway exhibition layout.s