Strange goings on at Herstmonceux 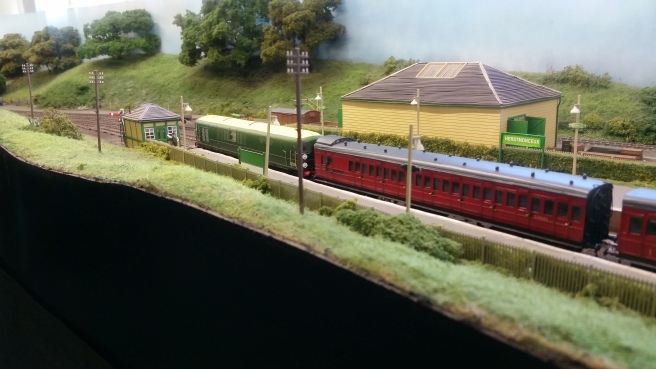 A busy few weeks coming up with a couple of shows to end the year. First up is Brighton MRC 40th show  next weekend 17th-18th November with Herstmonceux. The show looks like it will have a nice local feel to it with Herstmonceux, Plumpton Green and Sub Wealden all being Sussex based.

Then two weeks later its the Manchester Model Railway Society Show  1st-2nd December with Tarring Neville. It will of been just over a year since Tarring Neville had last been out so will look forward to running some new stock and there is also a few new items that have been added to the layout which there will be more about after the show.

Just a quick post to say its Uckfield show this weekend. Always a good show and this year is helping celebrate the HFS150 with the Colonel Stephens society.. 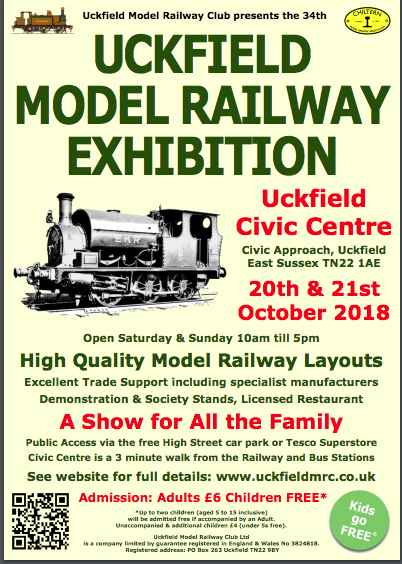 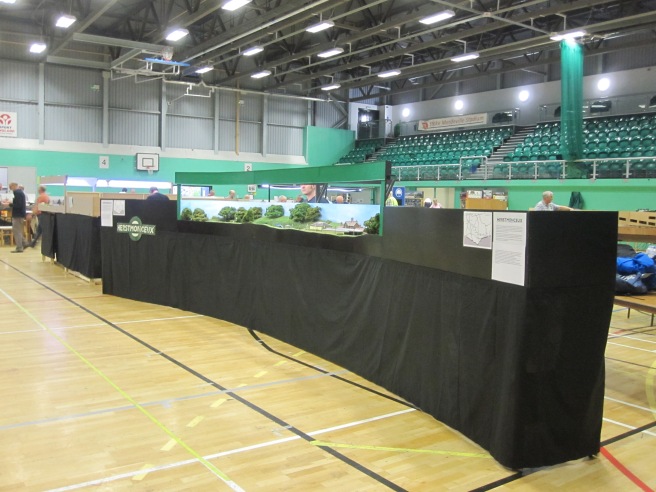 This weekend sees Herstmonceux making its way to Railex which is regarded as one of the best shows in the country. As I said in my post back in April, Herstmonceux hasn’t been out since last July so much of last weekend was spent cleaning the layout and tidying up bits that needed attention. Rolling stock was checked, fixed where needed and packed away ready.
Yesterday it was the turn of the locos to get a good clean and repair any damage. I usually give them a good run and oil as most of them haven’t been used for a while. Wheels are cleaned with a cotton bud and IPA, surprisingly most of the wheels were fairly clean. 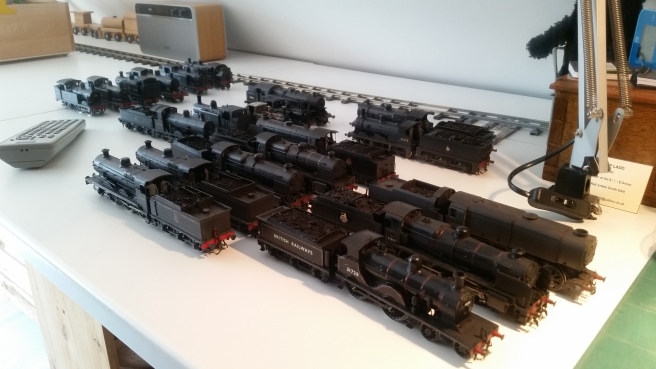 Why “Going home”? Well I was born in Aylesbury and grew up going to Railex with Dads trade stand, back when it was in the Civic Centre. One highlight was being lucky enough as 10 yr old to operate Jas Millham’s Yaxbury for the whole weekend, must be why I have an urge to build something in S gauge! So this weekend is rather special now that i’m getting to take one of my layouts to my home town show. All thats left is to make sure I’ve got everything and pack the van tomorrow.

In a month or so Herstmonceux will be at Railex so it’s time for me to start getting it ready. Now some of you might be thinking that it’s a bit early to start preparing for the show but Herstmonceux hasn’t been out since Exeter last July and could do with a bit of a freshen up. A few new trees need making and planting, some of the other vegetation could do with some work and the whole layout could do with a good clean. 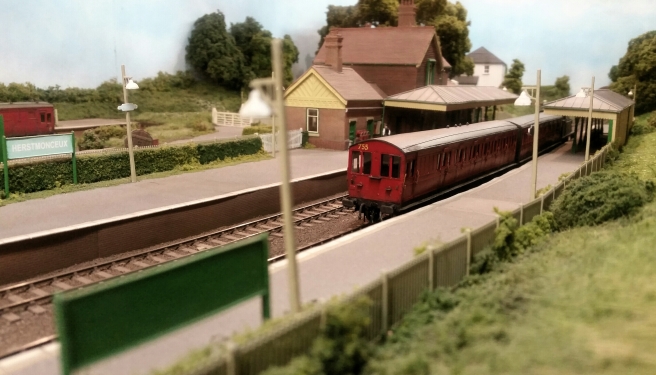 I have also been working on some items of stock. The I3 has been on the list of needing fixing for a while. Turns out the motor mount had broken so this was fixed and some tidying up of the weathering. My Std 4mt 2-6-0 had had its motor and gearbox pinched when I built my last K Class so this has been replaced. The Birdcage set and the LBSCR Pull-Push set still needed floors adding and a spot of weathering after being used at Exeter. Something else I wanted to do was go through my wagons and sort out some of the weathering on them. A lot of my wagons had had a quick job done on them so they were usable on Herstmonceux and I thought it was about time I gave them a better going over. 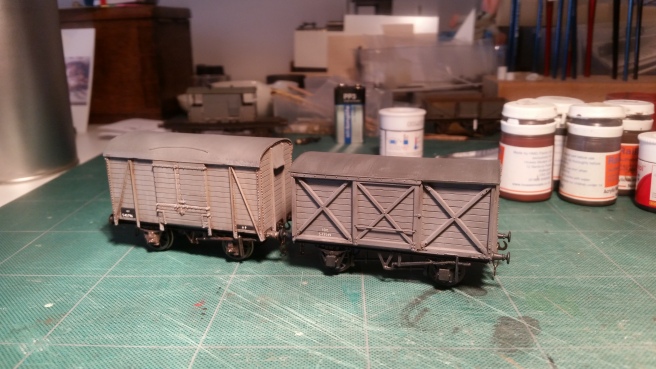 There is still plenty more to be done. The D3 is getting a new motor and High Level gearbox plus a pile of new wagons need finishing off. Should be a busy month or so.

So a few weeks ago Tarring Neville was at the Brighton MRC show. Its a fairly small show and has a nice friendly atmosphere. The layout ran well although the one Cobalt motor on the layout sounds like its going to pack up soon so I’ll be removing it and replacing it with a simple rod and microswitch instead. My friend Richard came along had a nice little Terrier with him which we gave a run.

Opposite us at the show was Peter Bossom’s 3mm layout ” Thunders Hill”. It, like Herstmonceux, is based on the Ouse Valley line but set in 1936-38. Its a layout that I have only seen pictures of so was really pleased to see it in the flesh. Thunders Hill is actually a road near Chiddingly and if Peter’s station had been built it would of been the next along the line from Herstmonceux. 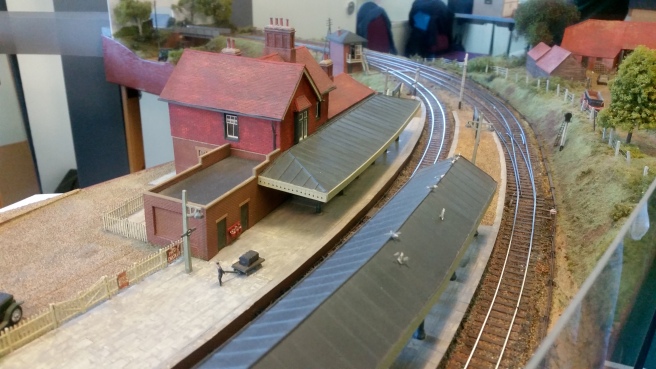 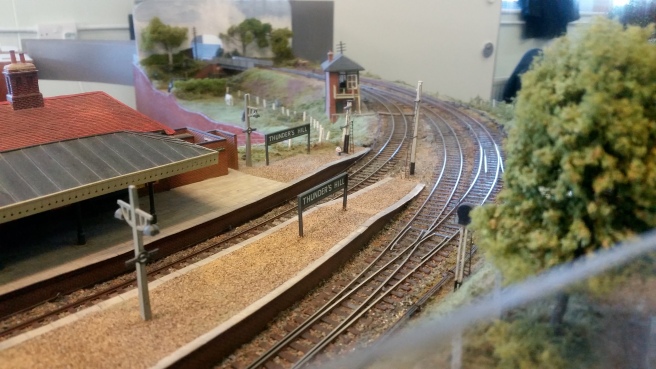 More information about Peters layout can be found here.